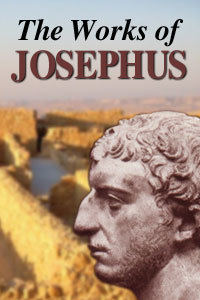 For centuries, Flavius Josephus' Works were more widely read in Europe than any book other than the Bible. They are an invaluable eye-witness, first-century account, to a momentous turning point in Judaism, Christianity, and Western civilization.

Josephus was born Joseph ben Mattathias in Jerusalem in 37 (A.D.) a few years after the time of Jesus, during the time of the Roman occupation of the Jewish homeland. In his early twenties he was sent to Rome to negotiate the release of several priests held hostage by Emperor Nero. After completing his mission he returned home to find the nation beginning a revolution against the Romans.

He was taken prisoner by Roman Legion General Vespasian, after the city of Jopota fell, Josephus presented himself as a prophet to Vespasian. Noting that the war had been propelled by an ancient oracle that foretold a world ruler would arise from Judaea, Josephus asserted that this referred to Vespasian, who was destined to become Emperor of Rome. Intrigued, Vespasian spared his life. When this prophecy came true, and Vespasian became Emperor, he rewarded Josephus handsomely, freeing him from his chains and eventually adopting him into his family, the Flavians. Josephus thus became Flavius Josephus.

During the remainder of the war, Josephus assisted the Roman commander Titus, Vespasian's son, with understanding the Jewish nation and in negotiating with the revolutionaries. Called a traitor, he was unable to persuade the defenders of Jerusalem to surrender to the Roman siege, and instead became a witness to the destruction of the city and the Holy Temple.

Living at the Flavian court in Rome, Josephus began to write a history of the war he had witnessed. The work, while apparently factually correct, also served to flatter his patron and to warn other provinces against the folly of opposing the Romans. He first wrote in his native language of Aramaic, then with assistance translated it into Greek (the most-used language of the Empire at the time). It was published a few years after the end of the war, in about 78 AD. when Josephus was about forty years old.

Josephus subsequently improved his language skills and undertook a massive work in Greek explaining the history of the Jews to the general non-Jewish audience. He emphasized that the Jewish culture and Bible were older than any other then existing, hence he called his work the Jewish Antiquities. Approximately half the work is a rephrasing of the Hebrew Bible, while much of the rest draws on previous historians. This work was published in 93 or 94 CE, when Josephus was about 56 years old.

Josephus wrote at least two smaller books, including his autobiography, in which he recounts his life from birth until the writing of the Antiquities.

Four of Josephus works have survived and been translated:

This edition of Josephus' Works were translated into English from the Greek by English Mathematician William Whiston in 1827.

A classic! Valuable as a guide to the study of the Old Testament, and helpful in understanding the history of the Jewish people.