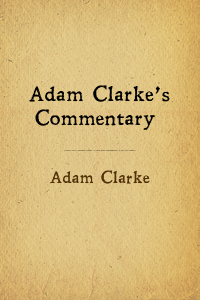 Systematically arranged by Samuel Dunn in 1835, this collection of both published and unpublished essays gives insight into the life and work of Adam Clarke. Specifically, this work offers his understanding of Scripture from a Wesleyan-Arminian perspective.

About the Author
Adam Clarke was born in Ireland in 1762. Clarke became a Methodist in 1778. In 1782, he was appointed to his first preaching circuit in Bradford, Wiltshire. He served in various places and traveled throughout Great Britain, while achieving fame as a preacher and serving as president of the British Conference in 1806, 1814, and 1822.

After 1805, Clarke served as a member of the committee of the British and Foreign Bible Society and worked as an adviser of its Oriental publications. He resigned from this task in 1819, having retired four years previously, due to his impaired health. Clarke was also active in the service of the Wesleyan Missionary Society from its inception in 1814, making two missionary journeys between the years of 1826 and 1828 to the Shetland Islands.

The most important of his numerous works was his Commentary on the Bible, originally published in eight volumes, which had a long and extensive circulation and took Clarke over four decades to produce. He also published a Biographical Dictionary in 1802, and its supplement, The Biographical Miscellany in 1806. His Miscellaneous Works were edited in thirteen volumes by J. Everett.

Adam Clarke died in London on August 28, 1832. He is perhaps the most famous Methodist/Wesleyan commentator to date.