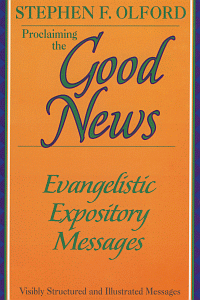 Rahab, John the Baptist, and the Ten Virgins - these are only a few of the Bible characters that bring vitality to these probing expository messages. In Proclaiming the Good News, each of the thirteen messages deals with a specific gospel theme designed to help speakers win people to Christ. Among the evangelistic themes are "The Miracle of Conversion" and "Radical Repentance," with every message concluding with a specific call to decision.