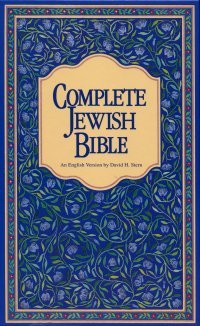 The Complete Jewish Bible is is a Bible translated by Dr. David H. Stern in English. This Bible includes the Jewish New Testament, a translation from the ancient Greek published in 1989, and a paraphrase of the 1917 Jewish Publication Society Old Testament version of the Tanakh.

Dr. Stern was born in Los Angeles in 1935 and was raised in the Jewish religion and came to faith in the Jewish Messiah, Yeshua, when he was thirty-seven years old. He moved to Israel in 1979 and is active in Israel's Messianic Jewish community.

Dr. Sterns wants his readers to know the purposes of the Complete Jewish Bible.

David Stern's diligence and sensitivity to the technical requirements of interpretation, as well as the cultural sensitivity needed for effective communication to his target audience, have made the Jewish New Testament a most worthwhile work. . . . There are always those among us who seek new tools for expanding and enhancing our effectiveness in communicating the Gospel of Messiah Jesus. I'm sure many will be assisted and blessed by this new work of Dr. Stern's.

The Jewish New Testament, a new translation by Dr. David H. Stern, accomplishes its intended purpose: it is an excellent medium for communicating New Testament truth to the Jewish people and it helps Christians understand and appreciate their Jewish roots. Dr. Stern's scholarship is credible, evidencing his knowledge of the Greek language and of textual history. The Jewish New Testament is a good, useful addition to the ever increasing library of modern translations.

Absolutely and without question one of the most unique of all publications of the New Testament is this one by Dr. David Stern, Jewish New Testament. It could not but greatly appeal to the hearts of Jewish people everywhere. As we all know, New Testament Scriptures, for the most part, were written by Jews and, to some extent, for Jews. The reading of the Holy Word as it first appeared in the Jewish language could not but be deeply and movingly appealing to the Jewish heart. . . . God bless the eyes, both Jewish and Gentile, who read these sacred words from the preparation of the human heart by the Jewish people.