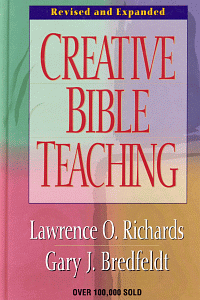 The Bible is a great book, so why is it so difficult to teach?

Many of us teach the Bible in small groups, Sunday School, or home school classes. We study, prepare, and present material. But is our best good enough? Are we just sharing knowledge, or are we leading students into a growing relationship with God and His Word?

In this newly revised edition of Creative Bible Teaching, authors Lawrence Richards and Gary Bredfeldt focus on how to better understand the Bible we teach and how to unleash the transformation power of Scripture.

Five practical sections include specific ideas on how to:

Creative Bible Teaching will become a foundational book in your library. A practical model for teaching and a classic educational reference book, it will renew your enthusiasm for teaching God's Word.

Lawrence (Larry) O. Richards was born September 25, 1931, in Milan, Michigan. His father was an elder in the local Presbyterian church, and his mother often verbalized her faith in the home. Richards grew up in the religious education programs of his church, but after junior high school did not give much attention to his religious formation.

His ministry includes teaching, writing, conducting training seminars, church consulting and leadership coaching. He has served as a pastor or senior staff member in five churches and has been involved in three church plants.