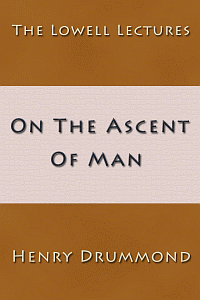 Originally published in 1904, The Ascent of Man sought to correct what Drummond felt was an oversight in the evolutionary biology research being done in his day. Most scientists, he says, accept without question that the struggle for life is the force of evolution. What they overlook is what he calls the struggle for the life of others, or the struggle for reproduction. Drummond combines his own theories with a heavy dose of Christian doctrine to arrive at what may best be called "theological biology," which assumes man to be the greatest, highest purpose of the universe. Anyone interested in the history of evolution, its proponents and its detractors, and the long-standing war between religion and science will find Drummond's contribution provocative and controversial.

About the Author
Henry Drummond was born in Scotland in 1851, he was a man of varied talents. He was perhaps best known as a gifted evangelist who assisted Dwight L. Moody during his revival campaigns. He was also a lecturer in natural science. Although he never received a degree, he was an ordained minister and a professor of theology. He also wrote several books: Natural Law in the Spiritual World, Tropical Africa, The Ascent of Man, Stones Rolled Away, and The Greatest Thing in the World.