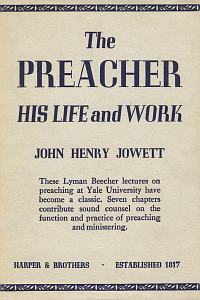 These Lyman Beecher lectures on the subject of preaching delivered at Yale University have become a long-lasting classic. Seven chapters contribute sound counsel on the function and practice of preaching and ministering. Jowett believed that the preacher must be called to preach by God and his job is more than just the preaching.

Practical lectures designed for those who seek to be more effective and influential in their ministry.