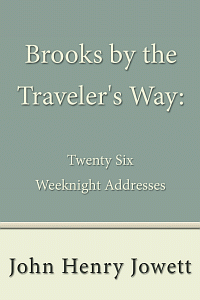 These addresses were originally published in the Examiner newspaper, and it was not intended by John Henry Jowett that they should ever take a more permanent form. They were found, however, to be so helpful and stimulating by a wide circle of readers, and so many requests for their republication were received, that it has been resolved to issue them in the present volume, with the hope that they may appeal for good to a still larger public.