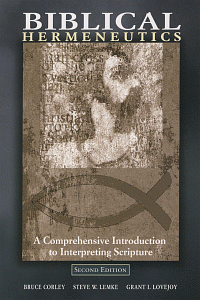 Biblical Hermeneutics is designed for students and ministers who want to grow in their ability to interpret, teach, and preach God's Word. It requires no understanding of Biblical languages or of the technical details of hermeneutics, the art and science of interpreting the Bible. This new edition is a substantial revision and expansion of the 1996 edition of Biblical Hermeneutics.

Bruce Corley, Th.D., is President and Professor of New Testament and Greek, at B. H. Carroll Theological Institute in Arlington TX. Corley is a graduate of Northeastern State University, Tahlequah, Oklamona where he earned a B.S.Ed. degree. He also earned M.Div. and Th.D. degrees from Southwestern Baptist Theological Seminary in Ft. Worth, Texas. Additional studies include Spurgeon's College, London, England and the University of Cambridge in England.

Before his teaching career at Southwestern Seminary, Dr. Corley served pastorates in Jonesboro and Breckenridge TX. He maintains an active schedule in Bible conferences, interim pastorates, and denominational activities. His professional experience includes memberships in the Society of Biblical Literature, the Institute for Biblical Research, and the National Association of Baptist Professors of Religion where he has held elected offices and worked on the editorial boards of two journals. He has lectured in Europe and the United States, delivering the annual lectures at four universities and two seminaries. Dr. Corley has presented nine academic papers in the scholars' guild as well as three series of studies for field missionaries. Among the twenty-five books and essays he has written, there are commentaries on Romans and 2 Corinthians. He is presently completing a commentary on Hebrews and a research book on Paul.

Lemke has been a pastor of numerous churches in Texas and has been interim pastor for twelve churches. He has served as a Youth Minister, revival evangelist for over a dozen revival meetings, speaker for over a dozen seminars in churches, preacher in over a dozen Bible conferences, delivered sermons in numerous associational meetings and college/seminary chapel services and participated in seven mission trips in four states and two foreign countries.