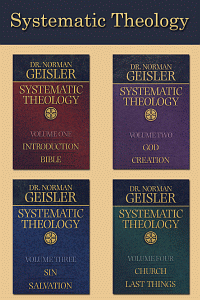 A culmination of decades of study, teaching, and research. This is truly a systematic theology for the twenty-first century.

As Dr. Norman Geisler explains and defends the essentials that make Christian belief possible-the preconditions-he lays a thorough foundation for Christian faith that will instruct theologians, pastors, and students for years to come.

Building on that foundation, Geisler's bibliology, including the inspiration and authority of the Bible, has been called "the most extensive defense of the consistent evangelical view of Holy Scripture available."

Dr. Norman Geisler clearly sets forth the reality of the existence of God: who He is. The author lays the foundation by explaining and describing the attributes and characteristics of God, among them His actuality and simplicity, life and immortality, unity and trinity. Dr. Geisler concludes this study by illustrating how we must respond to God's attributes with heart, mind, and strength.

He then turns to what God does, or His activity: the creation of all things, the origin of spiritual creation, the sustenance of creation. The section culminates in a discussion of God's relation to His creation.

In this volume, Dr. Norman Geisler examines the doctrines of sin and salvation. He begins with a discussion of human beings, covering the origin and nature of humanity. Next the elements of sin are studied, including sin's origin, nature, effects, and, finally, defeat.

In this volume, Dr. Norman Geisler explores the church and the last things, ecclesiology and eschatology. He begins with the church's origin and then outlines its nature, government, and ordinances, addressing both the church universal and the church local while also examining spiritual gifts and the relation between church and state.

In part two's remarkable presentation of time and eternity, Dr. Geisler expounds on the final resurrection, the intermediate and then final states of both the saved and the lost (heaven and hell), and the theories of purgatory and annihilationism. Then, turning specifically to biblical prophecy, he puts forth a basis for interpretational consistency before covering the Kingdom, the Covenants, the Second Coming, the Millennium, the Tribulation, and the Rapture.

About the Author
Norman L. Geisler earned his Ph.D. at Loyola University of Chicago. He is a co-founder and former dean of Southern Evangelical Seminary. Geisler is the author/co-author of some seventy books and hundreds of articles. He has taught theology, philosophy, and apologetics on the college and graduate level for fifty years. He has been a professor at some of the top Seminaries in the United States, including Trinity Evangelical and Dallas Seminary, and has been a guest at numerous other schools. Geisler has spoken in over twenty six countries on six continents. He and his wife Barbara live in the Charlotte, North Carolina area. He maintains an active writing, speaking, and lecturing ministry across the country.

A profound work from one of the finest theological and philosophical minds of our time.

Tremendous! Dr. Geisler's Systematic Theology is a book no library should be without. There are few other works as exhaustive in their approach or as erudite in their presentation. This is definitely something you can sink your teeth into.

Finally a systematic theology text that fully understands the essential philosophical and apologetic issues that make traditional theologies possible. In terms of philosophical support for theological claims about biblical truth, Geisler's is the most comprehensive text yet. This is an apologetic theology, and it is greatly needed in the experientialist environment we find ourselves in today.

Norm Geisler's Systematic Theology is a long overdue, and thus welcomed, contribution to the evangelical world, for it persuasively shows the importance and necessity of philosophical analysis in the theologian's craft. Dr. Geisler has a pastor's heart, a philosopher's mind, and a theologian's temperament. He's a cross between Thomas Aquinas and Billy Graham, and the result is this outstanding systematic theology.

Dr. Norman L. Geisler presents his magnum opus in the Four Volume Systematic Theology. Herein he reveals his magnificent obsession for Scriptural truth. This scholarly treatise is just a part of his magnanimous offering of praise to the Lord, who alone is worthy! 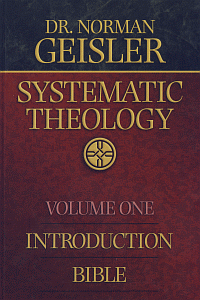 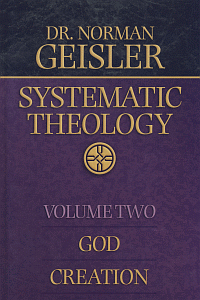 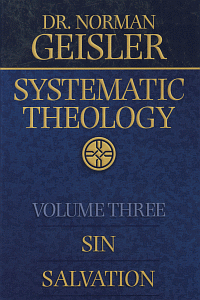 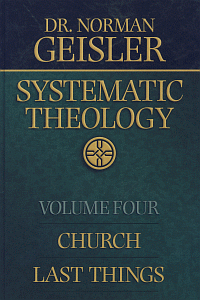