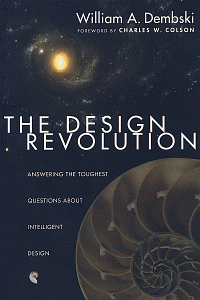 Is it science? Is it religion? What exactly is the Design Revolution?

Today scientists, mathematicians and philosophers in the intelligent design movement are challenging a certain view of science—one that limits its investigations and procedures to purely law-like and mechanical explanations. They charge that there is no scientific reason to exclude the consideration of intelligence, agency and purpose from truly scientific research. In fact, they say, the practice of science often does already include these factors!

As the intelligent design movement has gained momentum, questions have naturally arisen to challenge its provocative claims. In this book, William A. Dembski rises to the occasion clearly and concisely answering the most vexing questions posed to the intelligent design program. Writing with non-experts in mind, Dembski responds to more than sixty questions asked by experts and non-experts alike who have attended his many public lectures, as well as objections raised in written reviews.

The Design Revolution has begun. Its success depends on how well it answers the questions of its detractors. Read this book and you'll have a good idea of the prospects and challenges facing this revolution in scientific thinking.

William Dembski was born in Chicago, Illinois in 1960. He was educated at the Portsmouth Abbey School, at the time an all-male Catholic preparatory school. Finishing high school a year early, he attended the University of Chicago, but he struggled at it, and dropped out at the age of seventeen to work in his mother's art dealership. He says that he did not initially accept the precepts of Christianity, but during this difficult period he turned to the Bible in an effort to understand the world around him. Later, after becoming an Evangelical Christian, he read creationist literature. However, he did not accept the doctrines of literal creationists, though their criticisms of evolutionary theory did strike a chord in him.

Dembski returned to school at the University of Illinois at Chicago, where he studied psychology and statistics. He was awarded an M.S. in mathematics in 1985, and a Ph.D., also in mathematics, in 1988, both from the University of Chicago, after which he held a postdoctoral fellowship in mathematics from the National Science Foundation from 1988 until 1991, and another in the history and philosophy of science at Northwestern University from 1992–1993. He was awarded an M.A. in philosophy in 1993, and a Ph.D. in the same subject in 1996, both from UIC, and an M.Div from Princeton Theological Seminary, also in 1996.

He is currently Research Professor of Philosophy at Southwestern Baptist Theological Seminary in Fort Worth, Texas. Dembski has written numerous scholarly articles and is the author of the critically acclaimed The Design Inference and No Free Lunch: Why Specified Complexity Cannot Be Purchased without Intelligence.