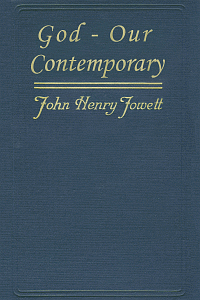 These sermons were preached during John Henry Jowett's time at Westminster Congregational Church. They emphasize the conviction that it is only in receiving the fullness of God's grace and in coming to a mature understanding of His will that the believer can find sufficient resources to address the difficult perplexities of the soul. Here, too, is where one can take the wider problems of society and find solace and wisdom to meet them. As Jowett says, "God in Christ is our great Contemporary, the same yesterday, to-day, and for ever."

Having compiled a small library of John Henry Jowett, I can truly say he has become a friend, a mentor, and one of my favorite Bible teachers.