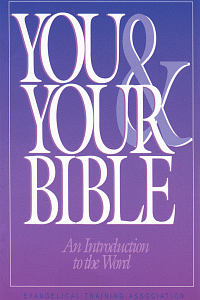 You and Your Bible
An Introduction to the Word
By: R. Laird Harris (Author)
Publisher: Evangelical Training Association
Category: Study Helps

Open discussion of the Bible and its claims is popular among both the churched and the unchurched. Almost every year a new version appears. Bibles are shelf stocked items in department stores, novelty shops, and most bookstores. Believers, especially those involved in church ministry, should be well-informed about the Word of God.

How did we get the Bible? Who wrote the Scriptures? How can we answer the Bible critics? Why do we believe the Bible to be the Word of God? How can we best study it? These questions are characteristic of those asked many times of local leaders and churches. You and Your Bible will help you to be able to answer them.

Dr. Harris received an M.A. degree from the University of Pennsylvania in 1941 and obtained his Ph.D. from Dropsie in 1947. He taught Biblical exegesis at Faith Theological Seminary from 1937-1956. In 1956, he, along with many other faculty, resigned from Faith Seminary over the issue that divided the Presbyterian denomination - church-controlled v.s. independently-controlled agencies. After this break, Dr. Harris became one of the founding faculty members of Covenant Theological Seminary; he served as professor at CTS from 1956-1981.

In addition to serving as a professor, chairman, and moderator, Dr. Harris lectured around the world, served on the New International Version translation team, contributed to the Zondervan Pictorial Encyclopedia of the Bible, and wrote several books, including Introductory Hebrew Grammar, Inspiration and Canonicity of the Bible, and Man--God's Eternal Creation.