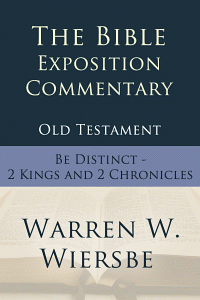 This, the final installation of the BE series, comes from 2 Kings. It is the tale of two kingdoms that committed spiritual and national suicide by imitating their neighbors and failing to “be distinct.” The parallels for today's Church are obvious and vital.

The Be series has sold over 3 million copies worldwide and touched people's hearts everywhere.