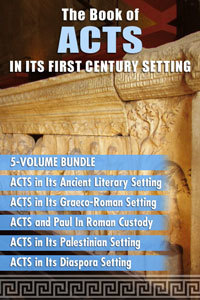 The book of Acts tells a remarkable story. In 28 short chapters it spans the ascension of Christ, Pentecost, the conversion of Paul, imprisonments, shipwrecks, stonings, and the birth of the Christian church throughout the western world.

Thanks to recent archaeology, we now have thousands of ancient writings and historical artifacts to give us insight into the world of the Mediterranean first century. An all-star team of well-known historians and biblical scholars from Australia, the United States, Canada, Russia, and the United Kingdom have collaborated to make this work available for anyone studying the book of Acts. The authors divided this set into the following 5 volumes:

Used in seminaries, this set is used to immerse students in New Testament culture, and it’s peppered throughout with footnotes. In Wordsearch, simply hover your cursor over a footnote, and what pops up for you is more information and sources.

At last we have a searching, in-depth analysis of Acts as history by an ancient historian of top quality...Levinskaya approaches the material head-on, bringing to bear her considerable learning and her formidable skill with the Greek inscriptions that are often the most important counterweight to Luke's picture. The Jewish Diaspora has benefited from extensive interest in recent research. Levinskaya enters the fray with vigor. But she has at the same time a great deal to offer that is new and important. Her notable studies of the cult of the Most High God and of Judaizers in the Black Sea area will reshape our understanding. To more familiar areas she brings her own subtle and original approach. Acts emerges from her scrutiny with a cleaner bill of health than we might have expected.

The Books of Acts in Its Ancient Literary Setting offers a number of quite fresh approaches to Acts...A dozen different genres or types of document are explored here, resulting in a rich mix of options. Acts emerges from its isolation into a world of contemporary rhetoric and contextual plane...A most attractive entrée to a promising series

An important contribution to a new and better understanding of Luke's Acts in its true literary and historical context. This work is coming at just the right time, when a change in the older pseudocritical but (in reality) unhistorical assessment of Luke is becoming visible. It shows that Luke is a real Hellensitic historian writing a monograph about the history of a new messianic Jewish sect called 'Christians'. This group of highly qualified authors gives a convincing overview from quite different perspectives, helping us to do more justice to Luke and to better understand his fascinating early Christian author.

The results of our rapidly expanded historical and archaeological knowledge have here been brought to bear on the Book of Acts to stunning effect. Outstanding as Jackson and Lake was in its day, this volume on the Graeco-Roman setting of Acts holds out the promise of equaling if not surpassing that great achievement.

This well-written volume offers a remarkable, up-to-date collection of relevant new data to assist in scenario formation for a considerate reading of the Book of Acts. The largely Australian and British team of authors must be congratulated for preparing this very useful data set. There are authoritative descriptions of travel, of food supply, of domestic and political religion, of urban elites, and of the Eastern Mediterranean provinces and their leadership. Such information about the realia of the Graeco-Roman world will enable the interpreter of Acts to bring these data to bear in the process of interpretation. . . Of great use to ancient historians, classicists, and biblical scholars, yet written and presented in such a way that it will be fascinating to intelligent nonprofessionals as well. 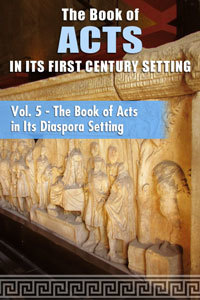 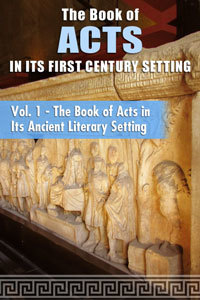 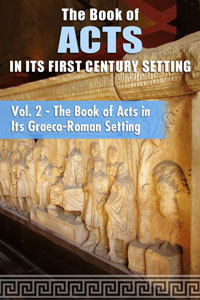 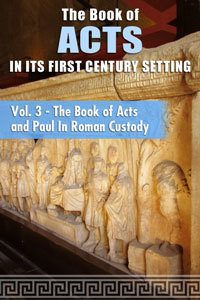 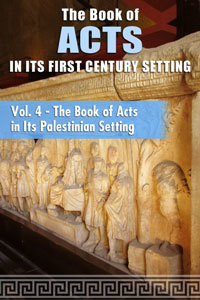