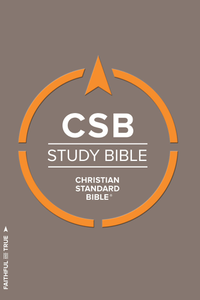 About the CSB Study Bible:

The CSB Study Bible offers the award-winning Holman study system, which includes over 15,000 study notes, tools, word studies, and articles from respected Bible scholars. The result is a study Bible that helps the reader better understand and apply the life-transforming message of God’s written Word.

The CSB Study Bible features the highly reliable, highly readable text of the Christian Standard Bible (CSB), which stays as literal as possible to the Bible’s original meaning without sacrificing clarity. The CSB’s optimal blend of accuracy and readability makes Scripture more moving, more memorable, and more motivating to read and share with others.

The Christian Standard Bible aims to draw readers into a deeper, more meaningful relationship with God. By translating Scripture into the clearest possible modern English, the CSB allows readers to experience God’s Word at its fullest.

The Ancient Texts As They Were Meant To Be Understood
Developed by 100 scholars from 17 denominations, the Christian Standard Bible faithfully and accurately captures the Bible’s original meaning without compromising readability. The CSB is a trustworthy text for both sermon preparation and serious study, translated straight from the biblical languages by scholars who love God’s Word.

But the true measure of a Bible translation is not only excellent scholarship. For a Bible translation to be trustworthy in modern English, it must faithfully communicate the authority and urgency understood by its original audience. Because the CSB is an original translation—not constrained by the structures of an earlier English Bible version—it expresses the meaning and beauty of the ancient texts with great clarity and emotional resonance. Pastors and laypeople can share God’s Word with confidence, knowing its truth will be communicated effectively.

How the CSB Was Translated
The CSB was translated using a methodology called Optimal Equivalence, which balances contemporary English readability with linguistic precision to the original languages. In the many places throughout Scripture where a word-for-word rendering is clearly understandable, a literal translation is used. When a word-for-word rendering might obscure the meaning for a modern audience, a more dynamic translation is used.

This process assures that both the words and thoughts contained in the original text are conveyed as accurately as possible for today’s readers.

History of the CSB
Over 20 years ago, a team of more than 100 top conservative scholars from 17 denominations came together with one common vision: to create an original English translation meticulously faithful to the ancient Scriptures and exceptionally clear to understand. With the benefit of up-to-date manuscript discoveries and significant advances in research, these translators, reviewers, and stylists exhaustively scrutinized ancient source texts— including the critical Greek text favored by scholars—to determine every nuance of original meaning and intent. The result was a Bible that not only shines by academic standards, but is also remarkably enjoyable to read.

The Christian Standard Bible provides a clear trustworthy translation of the Holy Scriptures in a style that the reader can clearly hear the voice of God in print speaking to their soul.

I am deeply grateful for the Christian Standard Bible, because it is rigorously faithful to the original languages without sacrificing clear readability. This translation will help believers and non-believers around the world be able to read, understand, memorize, obey, and proclaim God’s Word.

I appreciate the diligence of the group who worked tirelessly on the Christian Standard Bible. I believe it is a perfect blend of accuracy and readability. I look forward to using this in our Sunday messages and introducing our church to this fresh Bible translation.

The Christian Standard Bible is a landmark achievement—beautifully combining accuracy and accessibility in a way that makes it ideal for Bible study, reading, teaching, and preaching. I look forward to seeing how King Jesus uses this translation to edify the church and equip God’s people for mission in the world.

The translation team for the Christian Standard Bible is to be commended for this remarkable achievement. Both the Old and New Testaments can be characterized as consistent, faithful, accurate, and extremely readable. This much welcomed translation communicates in a clear and fresh manner for 21st century readers.